Vacation is over and I'm back for another round of gaming and blogging.
I'm not a big traveler. I think I've only been out of California a half dozen times. I'm just not good at it. I like having all my stuff around me and I like being able to just go home when I want to. But I must say, Toronto was awesome! It was very clean and the every single person we met was very friendly and polite. I always heard people say that when they come back vacation, but I never understood what they meant because everyone I run into around me is usually irritable and rude. Now I understand.
Now, my opinion of Toronto may be skewed slightly because I was in a very nice part of town and I'm sure they make sure its very clean and nice for the tourists, but it was a very nice change of pace. 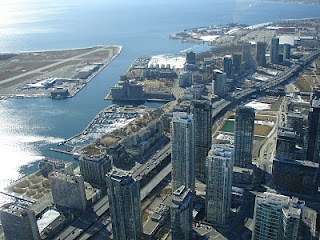 Our first day at the hotel may have been the best vacation day ever in the history of vacations. We were sitting down to breakfast in the hotel restaurant, I look over at the next table and notice that one of the San Jose Sharks is having eggs and bacon right next to me! Then suddenly we look around and realize that we were staying in the same hotel as them and they were streaming in. I met and shook hands with a bunch of them and actually stood and chatted with a former member of the team for several minutes. We wound up seeing nearly the entire team wandering through the lobby at one point.
Throughout the day (city tour and a trip to the CN Tower) we kept running into people in Sharks jerseys and it turns out they were all from the Bay Area. We met a very nice couple from out area and hung out with the for a couple of days. The game, Sharks vs Maple Leafs, was that night and the Sharks won and then we came back to the hotel where we hung out with a few of the players and the coaching staff at the hotel bar. 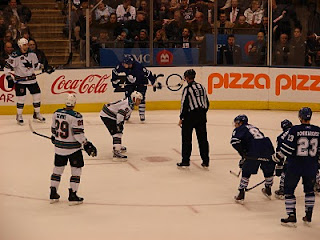 The team got held over a while because of a nasty snow storm on the east coast so we saw a few caravaning back and forth to Starbucks in the morning. After that we saw the Hockey Hall of Fame which was fantastic, Niagra Falls which was amazing but not exactly tropical in February. Although, the crowds were a wee bit smaller that normal. By the way, Niagra On the Lake is a very nice little town.
On a gaming related note, we saw the King Tut exhibit and I got inspired to do some Tomb Robber type of gaming. I wound up writing a lot of adventure notes while my wife wasn't looking, otherwise I would have been been severely beat about the head and shoulder region.
I have to say, I HIGHLY recommend visiting Toronto to anyone looking for a nice vacation destination.
Posted by The Frothy Friar at 3:04:00 PM