And I don't even drink coffee...

So the name of my site, The Frothy Friar, came from a game I ran years ago with my regular group. It was about the party finding the deed to a Tavern on a dead adventurer and then going to claim it as their own only to find out that it might have been more trouble than it was worth.

Anyways, once they arrived and started fixing up the place, they decided they needed a name for their den of iniquity. They spent hours shouting out some of the most horrendous suggestions you can imagine. It quickly degenerated into a "who can spew out the lamest joke" contest, which, by the way, is not a contest you really want to win. Then suddenly, James, playing a husky, hard drinking, hard punching priest named Ulrich Blasgaard, yelled "The Frothy Friar!"

After all the stupid names and lame-ass jokes, suddenly everyone stopped dead in their virtual tracks and collectively shrugged their shoulders and exclaimed with one voice "eh, that'll do."

And do it did. From then on, all of our fantasy adventures have been centered around Ravendale and the Frothy Friar tavern and Inn (patent pending).

So to make a long story...seem just as along as it really is....I did a quick search of "frothy friar" and 'lo and behold, Google, the patron saint of bored office workers, informed me that there was once a man, a 17th century priest in fact, named Marco d'Aviano that was called the Frothy Friar! 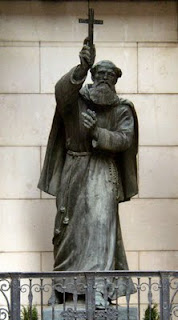 Marco d'Aviano, a seventeenth-century Capuchin friar, was beatified by Pope John Paul II during Easter week. D'Aviano is credited with being the inventor of cappuccino coffee and therefore very much a saint for today's society. However the Pope may have had deeper gifts in mind.

D'Aviano took sacks of bitter coffee and sweetened the resultant brew with honey and milk. The coffee belonged to a huge army of Ottoman Turks besieging Vienna and it was a prayer meeting, led by our Marco, that inspired the heavily outnumbered Christian army to rout the invading Muslim hordes. Without that victory it is highly likely that most of Western Europe would have become part of the Islamic empire and we would now be loyal residents of Anglistan. Next time you're in Starbuck’s you might raise your mug to Marco.