Rot Grubs and Other Character Irritations

Its been a very long time since one of my character's has run across a good ol' fashioned rot grub. It seemed to me that back in the 1st edition days, rot grubs were always a concern.

Listen to an old rotted door? nope, could be rot grubs.

Search a decaying body for loot? are you kidding? could be rot grubs.

They didn't do a lot of damage (other than having to burn them off) but they were annoying as hell. Just the idea that tor grubs could be present could bring a valorous party of hearty adventurers to a grinding halt. "I'm not listening, you listen!" "I'm not searching it, you search it!" would be the 30 minute argument usually ending in a cowardly retreat or someone going back to town to by the obligatory 10' pole. Granted, if a character was infected by these devious little buggers, there was some real danger. If not treated, they would burrow to the heart and kill the host in 1-3 turns, but no one ever let it get that far. There was always a sadistic party member tripping over themselves trying to be the one to burn them out of his companion. The real damage that the good ol' rot grub caused was fear. Once a DM threw them at the party, they knew they better be on their toes because bigger and better traps were coming.

But rot grubs weren't the only irritant that 1st edition players ran across.

What are the Trapper/ Lurker Above combo? A floor that swallows an adventurer? A ceiling that falls down and does the same thing? That's just wrong, and DM's knew it.

Goblins playing poker? I can deal with that.

A dragon on a mound of treasure? No problem.

An owlbear playing hopscotch? Weird, but nothing I can't handle.

An room with absolutely nothing in it? I don't like it.

If a party stumbled on a room that was completely devoid of monsters, loot and junk they just knew something was amiss. Typically, and you would be right to think this way, the party assumes "trap" so you send your best trap finder in to check it out. Who in their right mind think that there was a monster sitting there in plain sight the whole time. Certainly not the thief that's now engulfed in a 10' x 10' monster belly. Again, this is where the often misunderstood 10' comes in handy. 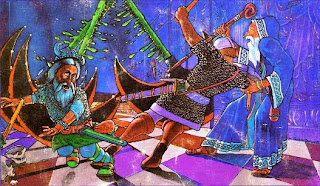 And lets talk about traps. When was the last time you ran into a good scything blade? Sure, everyone falls in a spiked pit. And who hasn't succumb to the old stand by falling block? But what about the venerable and dependable scything blade? it gave us many years of stalwart service to be cast aside for the "flavor of the month" poison dart. Nothing says "You should have checked for traps" like 3' of glinting steel on a hard wood pole dropping from the ceiling. What DM hasn't felt the excitement of anticipation when a party rushes into his trapped hallway without even so much as a "Maybe we should be careful". Who among us hasn't squealed with glee (on the inside of course) when they tell the front rank of character's that they "hear a click and a scything blade drops from the ceiling"?

Now, this one I think is specific to my gaming group. Once upon a time some guys from my group went on a camping trip (which I couldn't make) and took their gaming stuff. Because they only brought one module, they had to replay it over and over again. Well, to make a long story short, one of the players was killed 3 times in the same room by the same spider 3 different times through the same module. So from then on the SOP (standard operating procedure) for room clearing is "crack the door and look in, check the ceiling." Spiders scare me. Spiders falling on my head scare me worse. Five foot wide spiders falling on my head make me go underwear shopping.

Anyone else have some good old annoying encounters that seem to have fallen by the wayside?