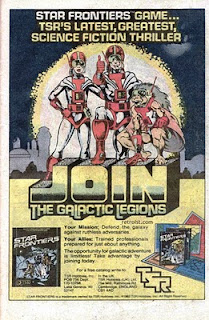 Now this is a game I DID get to play.
Star Frontiers was like a poor mans Star Wars in that it didn't have the notoriety and publicity that Lucas' films did. This was always like a little brother to D&D and I don't think that many people had the pleasure of playing it, but it was a fun game. This was one of the few games when I wouldn't play a human. I usually played a Yazarian (basically a space monkey with flaps for wings). They just seemed cool. I liked the concept of the Dralasite, but they reminded me of Gloop and Gleep from the Herculoids.
Gloop and Gleep