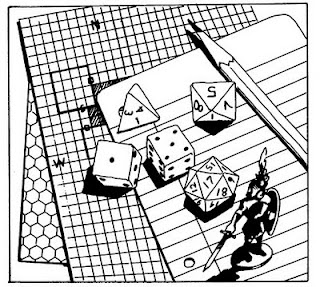 I was reading a post from JB over at B/X BLACKRAZOR about character attributes and how many are too many in his opinion. While I agree with him in principal that too many attribute can become cumbersome and tedious, I find myself designing a game system that has 10 attributes.

I have a similar attitude towards RPG in that I can't seem to leave a system alone. I always have to tweak them and modify them to fit what I think they should be, or to correct what I see as flaws. So some years ago (a LOT of years ago) I started writing my own system so it would be exactly what I wanted from an RPG. As I started putting things together, I started getting more and more attributes to flesh out what a character is. What I ended up with (so far) is 10: Strength, Health, Endurance, (manual) Dexterity, Agility, Speed, Intellect, Perception, Will Power and Bearing (charisma and presence).
"You're a mad man! That's too damn many attributes!" you say? 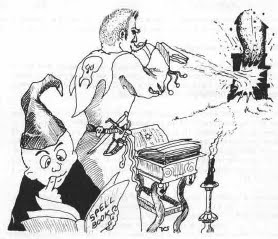 I thought that myself at the beginning, but when comparing to existing games (D&D for example), aren't saving throws similar to a character's attribute? It's his ability to resist or overcome certain situations. So I decided that the attributes would be the backbone of the character and his attributes would double as saving throws. Instead of making a Reflex Save or a Save vs. Breath Weapons, the character would make an AGILITY check. and the player would determine for himself how able he was in those situations. Sure it sounds the same, but Agility also determines a great deal of other things. It, and all other attributes for that matter, serves as a fall back stat for characters wanting to try something they don't have a specific skill for.
Sure, this may just be a re-imagining of a hundred other systems, but I wanted a little more definition for characters and what they are capable of. I wanted them to be different than one another. With a system like GURPS, for example, those three stats don't distinguish characters from one another very well.
So I guess what I'm asking is...how many attributes is TOO many attributes?
If you make "saving throws" player defined, does that make them attributes?
Posted by The Frothy Friar at 11:15:00 AM