DM's Corner: The Devil's in the Details 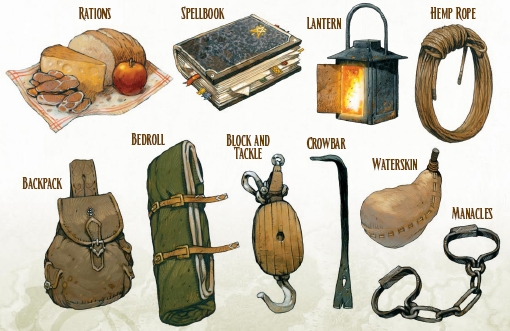 How much detail should you go into in a game before the whole thing collapses under it's own weight?
Do you track food and water for the party?
Does each character have to keep a running tally of encumbrance?
They may seem like minor details, but I find they can be a great source of plot hooks and sometime necessary information.
Lets talk about food and water first. Granted, you can easily assume that the party can hunt and forage for food and water. Or you can take for granted that they stock up on food in town before heading off into the wilderness to avoid the tedium of tracking how much they have on a given day, but that can also do a dis-service to your game. Say you want to surprise the party with a little "survival" adventure where they are lost in the desert and need to use their wits to survive, but not for a few days. If you have never tracked food and water before, and are suddenly asking them to do so, would it ruin the surprise? Would you have a party of adventurers who now know they are going to be starving and dehydrated pretty soon? Of course. Now, it may not be a huge problem to suddenly say "By the way, you've been in the desert for 6 days now, and you're out of food and water" to get the survival ball rolling, but would the players then feel slighted that they weren't allowed to prepare properly?
By keeping track of food and water, even if it is at a cursory level, at least they have the opportunity to be prepared at all times and maybe that will alleviate the feelings of "railroading" that they may have.
Now, lets talk about encumbrance. I think this is the most overlooked, or flat out ignored, aspect of RPGs. No one wants to keep track of how much every little piece of equipment weights at all times. What if I use up a candle or a flask of oil? Do I really need to keep track of how much my chalk and hand mirror weight? but what happens when they slay the dragon and are faced with a massive treasure horde? Do you NOW expect them to calculate how much they are carrying to determine how many copper pieces they can take home with them? It would almost feel like a punishment to balance their reward. What about the dreaded river crossing when one of the party inevitably falls in and you have to decide if he's sinking or swimming? Do you wait till that moment to decide how much his gear weights and if he's strong enough to dog-paddle to shore? Couldn't it be more of a team building exercise to have the party do a little prep work BEFORE they leave town to determine who is carrying what? And maybe those strong fighter types can help alleviate some of those pesky items that the wizard has to carry so he can bring an extra spell book. After all, isn't that what you would do in real life before going on a hiking trip? And all of this can add to adventure tension when the party gets split and one character has the vital piece of equipment that the other half needs.
I am as guilty as anyone of skipping these important details. Brushing them off as "too realistic" for a fantasy game. This is supposed to be fun, not work. But part of the fun, to me anyways, is making it feel a little more realistic. Let the party sit for a few minutes before they set off to determine a few things like: How long they will march each day, what they will do before camping for the night, who will be on watch and when, who is carrying the extra bandages and oil flasks they'll need once they get to the dungeon. It may seem like over kill, but I've always found that they gain a sense of camaraderie by all taking part in planning their trip and not just rolling dice once they get there. Plus it makes for some good player/ character interaction that sometimes goes missing in games.
Posted by The Frothy Friar at 10:21:00 AM