Clerics: Are They Too Powerful?

I remember a time, not so long ago, when no one wanted to be the party Cleric. I've written about them before in my hard hitting expose "Clerics: First Aid Kit or Second Line Fighter", and since then I've been doing quite a bit of gaming. I've noticed that no one has a problem being the cleric anymore. In fact, two of the last four adventures I've gone through had multiple clerics. That got me thinking: Are clerics TOO powerful now??
Let's take a closer look at what a cleric can do (speaking from a Pathfinder perspective): 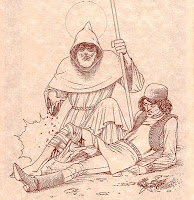 They are nearly as good a caster as a wizard with a wide variety of spells AND they can use nearly as good armor and weapons as a fighter. Maybe not so much the weapons, but a good and effective variety. I would go so far as to say they are better fighters than rogues are.
Now add all that up and I'm starting to think they are a little OVER powered. It seems our favorite little first aid kit has grown up and is playing with the big boys now. Did the game designers go too overboard to make the cleric a more desired character class and instead create a monster?
I'm not so sure a character class should be that strong in martial abilities and still be able to cast nearly as many spells as a wizard. Conversely, I'm not so sure someone with that many spells should be that good of a fighter. But maybe that's just me.
Posted by The Frothy Friar at 5:30:00 AM

Email ThisBlogThis!Share to TwitterShare to FacebookShare to Pinterest
Labels: Cleric