Clerics: The old school bane of any party of players.

We've all experienced it in our younger days. It's the first night of the adventure and it's time for everyone to make characters. Everyone shouts out what they will be playing so everyone else knows what's been chosen. Suddenly, the door bell rings and Steve walks in, late as usual. Everyone in the room, including Steve knows what's just happened. Last man in gets stuck playing the cleric.

Nowadays, of course, things have changed with the inclusion of rules that allow a cleric to substitute any of his memorized spells for a healing spell of an equal level, but it didn't always used to be like this. In the golden days of Dungeons & Dragons, a cleric got what he memorized and had to live with it and woe to he who didn't memorize enough healing spells. 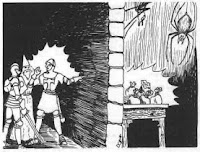 Looking through the clerics choice of spells, he has a pretty diverse variety of spells he could choose from but never seemed to get choose those. He was always expected to be the parties first aid kit. "Steve, just stand behind me and keep healing me while I fight these orcs." We've all heard it, and in most cases, have said something very similar. That doesn't make it right and that's exactly why no one liked playing the cleric. Your job, nay, your very existence was to stand in the corner and come running when called for by the fighters. No one wanted that job. No one wanted to be in the "Break Glass in Case of Emergency" box. It was boring and no one respected you even though yours was one of the most vital roles in any adventuring party.

If we examine the cleric a little further however, we see that he could be far more that a band-aid with legs. His armor could rival that of any fighter which allows him to stand toe to toe with most monsters. While his weapon selection was limited, it was by no means weak. He could use hammers and maces and flails oh my! Anything that didn't draw blood basically. Which was probably a self imposed rule out of respect for enemy clerics knowing that they too were seen as magical medics and played to the "treat others as you would like to be treated" philosophy. Shields were no problem for a cleric. And the beauty of all that metal plating, they could still cast spells while wearing it, unlike our squishy companion the wizard.

All of this combined could make them a formidable secondary fighter. He doesn't his as well as a fighter in combat, but he advances just behind his sword-wielding buddies. This all adds up to a very qualified warrior-in-waiting.

On top of all this, Clerics are the bane of undead. Sure, your fighters can hack them and your wizard and zap them, but why go to all that trouble when your friendly neighborhood cleric can way a holy symbol at them and make them quake in their undead boots?

With new rules involving spell substitution, domain powers and expanded weapon selection, the Cleric is even more powerful and more versatile than ever before. In fact, I've seen clerics played that never cast healing spells. They increase the parties abilities and make them more powerful so that don't take nearly as much damage as they normally would. This to me is more of a challenge and more fun that simply putting band-aid on the parties owies when the fight is over.

So how do you see Clerics past and present? Party physician or second line fighter?

Email ThisBlogThis!Share to TwitterShare to FacebookShare to Pinterest
Labels: Cleric, Dungeons and Dragons