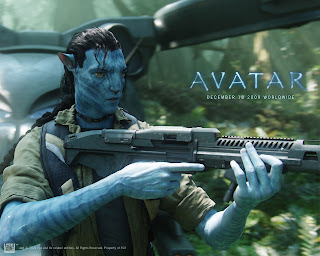 Any of you out there that wear glasses like I do know what a pain in the ass it seems like to wear glasses OVER glasses. Well, let me tell you, it's exactly the pain in the ass you're imagining. I had to sort of balance them on my nose and lean my head back a little so they wouldn't slide off. And then my field of view was narrowed because the frames were sitting away from my face which blocked my vision some. It was sorta like in a movie when a character is looking through binoculars and the camera shows their view, you get the image of two circles side by side and everything outside of that is black.

If you can't tell, I'm not a huge fan of 3D movies. I haven't seen a 3D movie since Treasure of the Four Crowns. Never heard of it? Exactly my point, it sucked. I always hated how 3D movies felt like that had to make a point of making actors shove things at the camera just so you feel like things are coming out of the screen at you.

Anyways, enough about my hatred of 3D and on to the movie. Even though I had my struggles with the glasses, the 3D was something that I had never seen before. The actors didn't need to point their guns at the camera so you feel the barrel coming out at you, everything in the movie felt like it was at different depths of perspective. When the hero, Jake Sully, is doing a video log, the information displayed in the corners of the screen seem like they are much closer than his face. And this goes on throughout the movie without trying to do it. It felt like watching a movie through a View Master. Which was pretty damned cool.

The effects were amazing, which you sort of expect from James Cameron who gave us Aliens, Terminator, Abyss and Titanic. He knows how to make big effects and make them believable. And this was definitely that. The colors and lighting were spectacular and the size  and depth of the visuals were cutting edge. If you have acrophobia, you might want to think twice about seeing this. There are scenes in trees that are hundreds of feet above the ground that make you a little nervous. And that's what this movie is really all about, the visuals.

The story is nothing new. In fact, as I was watching it, I couldn't help but compare it to Dances with Wolves. In fact, the tribal leader even sounded like he was speaking Navajo and the rest of the tribe whooped and shouted like stereotypical Indians on the warpath. There aren't any real spoilers to give away as you can see everything coming a mile away, but that doesn't keep you from wanting to see what happens next if for no other reason than to see what it will look like. I needed to go to the bathroom for nearly an hour, but didn't want to get up because I didn't want to miss a new creature or trip through a flying mountain. It wasn't the story that kept me in the chair, I knew exactly what scene was coming next, because it was the next logical step in the story.

James Cameron is starting to drift into George Lucas territory. More interested in effects and technology than a good, original story. But the difference is, James Cameron doesn't treat the audience like children and add scenes that are obviously just to sell toys or base a video game off of. Of course, that's just my opinion.

Overall, I would definitely recommend it so everyone else can see the stunning visuals that he puts together on the screen just like I did. Just don't go there expecting a compelling and original story.