Battlemats: Bane of the Imagination? 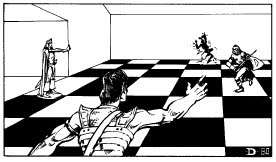 I've been lurking other blogs for a while now, and all the talk about "Old-School" D&D, Grognards and B/X Editions has me thinking. I can't remember how to do combat without a battlemat anymore!

I clearly remember running combat in the good old days, before the invention of battlemats and 3rd edition rules, and there was hardly ever a question about tactics or distances or positioning. But ever since 3rd edition rules came out people, including myself, have come to rely on battlemats more and more. And with that dependancy, I believe, has come the downfall of imagination.

Now, every time a DM says "roll for initiative", the first thing the party says is "clear the table and get the mat!" and then it bogs down into a long, drawn out evening of "Can I shoot that orc with Black Dougal standing in my line of sight?" or "I'm going to move 6 squares, just inside the door so I can shoot my bow but the orc can't get an attack of opportunity."

I don't remember any of those discussions when I was younger. It was a much more evocative description by the DM, because if he wasn't very specific what the layout was, the players wouldn't get the image in their heads and understand what was going on. Granted, this system wasn't perfect and there was always some confusion and questions during the combat, but at least people were still using their imaginations and seeing the scene in front of them rather that seeing a bunch of squares. 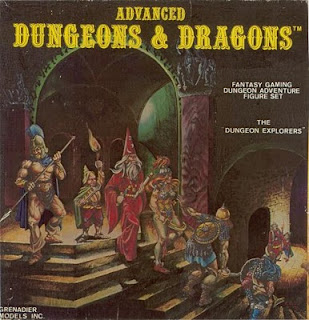 Hell, we even had miniatures in those good old days, but we didn't have the big grid to force us into our static little 5' squares. We just sorta set them up on the table in a general idea of where things were and judged from there. Its almost become a totally different game once combat starts now. For half the night you play D&D, but when combat starts suddenly you're playing Warhammer. You have an entire section in the rulebook dedicated to how combat works on a table top format: what cone spells will look like on a grid, what cover looks like on a grid, how minis can move on a grid, how many spaces a large creature occupies on a grid, how far away a giant can hit you from on a grid.

I'm not saying its necessarily worse, but it is certainly more rigid and structured. The more rules you add to a game, the more hard-fast the game play begins. You lose the free-form, free-thinking of a "role-playing" game and create a room full of rules lawyers trying to prove they can do something by citing page 238 of the Dungeon Masters Guide II, paragraph 3 on the right had side, right under the picture example of cover and concealment. What happen to the DM have authority to make decisions in combat based on what he felt was right and would flow the best to keep the game exciting?

It's been so long since I played that way, I really don't think I could run combat without a battlemat anymore. I think part of my imagination was coup-de-graced by Chessex and that damned 24"x36" piece of vinyl.