The Forgotten, The Neglected...The Copper Piece

As a DM, I always felt bad for the poor copper piece. Always the one to be tossed aside for something better. Always scoffed at when offered as payment. Most likely to be thrown down a hallway to check for trapped floors.
As adventurers become more and more powerful their standards of treasure become higher and only a certain caliber of monetary gain is suitable. Only gold and above will suffice for the well-dressed, high level adventurer. So where does that leave the poor copper piece? The bottom of a beggar's cup or stuck to the sole of an adventurer's boot that's where. 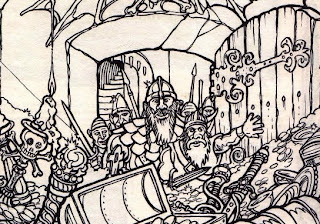 So as you can see, now when they find a copper piece, they won't be so quick to toss it aside. Sure, it might just replace the lowly valued Copper and Silver pieces with differently named Iron and Brass pieces, but at least Iron and Brass don't seem as valuable as Copper and Silver. If you left a round piece of iron laying on the ground, you wouldn't think twice about it.
Posted by The Frothy Friar at 1:58:00 PM

Email ThisBlogThis!Share to TwitterShare to FacebookShare to Pinterest
Labels: Treasure