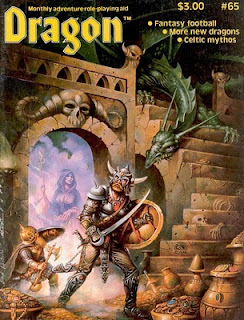 In keeping with a previous post in which I got the insane idea to work on a High School setting for monsters, I remember an article from an old Dragon Magazine, issue #65 to be exact, that was actually a game called Monsters of the Midway. I went back and looked at the article again for a specific image I remembered, that was particularly relevant to a monster high school.
Behold...Monsters of the Midway. Or as I like to call it...The Hogworth Monster's Varsity Football Team 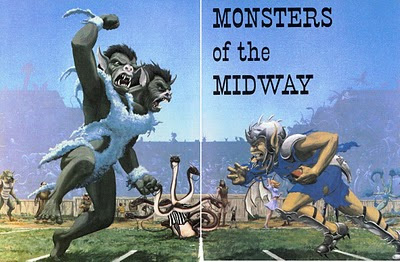 Featured here is star running back Seamus O'toole on a long drive into the Inverness High School Ghost's back field. On defense is All-Conference Free Safety Billy and Willy Jackson. The Monsters went on to defeat the Ghosts 42-17 to remain undefeated in the Slave-Lords conference. Up next for the Monsters is the Borderland's Silver Princesses. The Monsters are expected to trounce the Silver Princesses who are dead last in the Ravenloft Conference and last in the Demonweb Division. If the Monsters can continue their siege on the league, they may have a chance to play for the coveted Black Dougal Memorial Trophy later this year.
Posted by The Frothy Friar at 11:09:00 AM

Email ThisBlogThis!Share to TwitterShare to FacebookShare to Pinterest
Labels: Monsters of the Midway