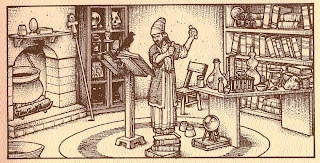 Wizards (and I'm talking about all wizards other than 4th Ed D&D) are both a boon and a bane. Anyone that has played a wizard from level 1 know how difficult it is to survive and be a productive part of an adventuring party with the limited number of spells he is allowed to begin with. With only 1 or 2 spells available early on, you pretty much get relegated to being a crossbowman for much of the adventure. A party of adventure hungry warriors and priests don't want to have to stop for the night after every encounter just so you can get your sleep and magic missile spells back. And I can't blame them, so it's back to using the crossbow.

Email ThisBlogThis!Share to TwitterShare to FacebookShare to Pinterest
Labels: Dungeons and Dragons, Wizard

Rot Grubs and Other Character Irritations

Its been a very long time since one of my character's has run across a good ol' fashioned rot grub. It seemed to me that back in the 1st edition days, rot grubs were always a concern.

Listen to an old rotted door? nope, could be rot grubs.

Search a decaying body for loot? are you kidding? could be rot grubs. 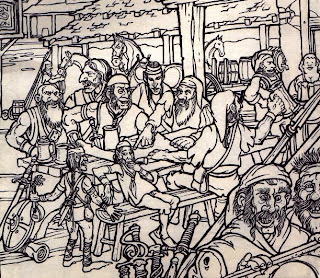 It's always seemed to me that the hardest part about any campaign is the introduction.

Once the game is started and the party is in the groove, everything runs smoothly, or at least it's EASIER for it to run smooth. The difficult part for any DM is introducing a group of new characters to one another. Sure, there's the ol' "You all meet in a tavern" sorta thing, but how often can you pull that one off? This is obviously not a "realistic" game we play, but the quickest way to take players out of a game is to blow off the very first thing you show them. You need a realistic intro to any new campaign so the players feel there is some previous attachment to the other character's. Otherwise, it can quickly break down into selfish, individualistic agendas.

In the final chapter of the "Games People Play" trilogy, I'll be discussing some of the video games I used to play as an impressionable youth.

My first real computer gaming experience, other than the arcade, came by way of the Atari 2600.

It was the hip system at the time and cartridges flew off the shelves like shotguns in a zombie apocalypse. The graphics were weak and the sound was pretty horrendous compared to what was offered at the local Golfland or Timezone arcade, but it had the added convenience of being able to play at home. So you know, it had that going for it. I distinctly remember several decent games (and I say decent as it relates to the Atari only), like Adventure (the first game with an easter egg), Haunted House, Combat, Yars Revenge and Dragonfire. While these weren't exactly state of the arts games, they were entertaining to 9 year old.

Board Games I used to play

Continuing with my retrospective on games that I've played or wished I had played or even thought about playing...today's topic, boys and girls, is board games. Not your typical board games mind you, these are gamer-related board (and table top) games. I won't include Monopoly or Chutes & Ladders, but those that you would typically find in a hobby store or on the forgotten bottom shelves at Toys 'r Us in the 80's.

I remember buying this game with my own money when I was about 12 years old. I saved my allowance for a couple of weeks and (with a small advance on future earnings from my dad) was able to secure my copy of the only D&D related board game that I knew of at the time. This is back in the good ol' days when you could still but AD&D modules at Toys r' Us or other fine toy and game retailers. It was an enjoyable game of dungeon crawling for fun and profit. I would meticulously travel from one room to the next engaging in life or death combat and collecting loot.

RPGs I wish I had played...

Yesterday I listed some of the RPGs that I've had the pleasure of playing over my 30 year gaming career. Today I would like to talk about a few that I always wanted to play but never had the opportunity. The reasons were always sound (i.e. the group I was with just wasn't into at the time, no one was really sure how to run an effective game or they just didn't want to learn ANOTHER game system) but the fact remains, I wish I had the chance to play them.

Thought I would talk about some of the RPG's I've had the chance to play over the years. I've had a chance to experience quite a few, certainly not all, not even most, but a good array of what was out there in the 80's and early 90's. My group and I would experiment with a wide variety of game genres but we would always drift back to our old stand by...

The classic of all classics. The one game to rule them all. The Ayatollah of Rock n' Rolla 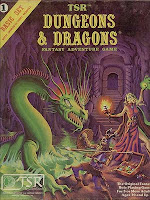 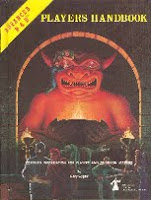 And upon further review...

Well, that took me all of 2 minutes to refute my own findings...

Google's arch-nemesis, the evil Wikipedia, fired back and states:

A popular myth concerning d'Aviano says that he invented the Cappuccino after the Battle of Vienna.[2] No mention of this occurs in any of d'Aviano's biographies or in any contemporary historical sources. Indeed, the story does not appear until the late 1980s, which indicates that it was possibly made up as a joke.

still, it's a cool name right?

And I don't even drink coffee...

So the name of my site, The Frothy Friar, came from a game I ran years ago with my regular group. It was about the party finding the deed to a Tavern on a dead adventurer and then going to claim it as their own only to find out that it might have been more trouble than it was worth. 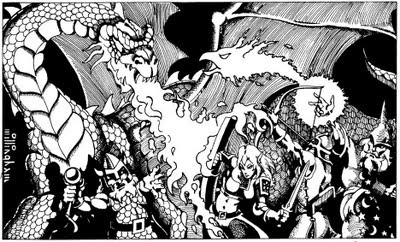 I can still remember, vividly, my first foray into the world of Dungeons and Dragons. It was the summer of 1979 and I was 8 years old. My neighbor's daughter used to work at the local Goodwill and one of her co-worker's, a nice man named Jessie was an avid gamer. You can read a brief history of my introduction to gaming here.

I've been following some great web comics for the past couple of years so I thought I would spread the word and maybe generate a little interest for them as payment for my free entertainment.

First up is PvP, a daily comic that centers around a group of nerds working at a gaming magazine.

Secondly is Ctrl+Alt+Del, that follows a gamer, his best friend, his girlfriend and his XBox-turned-robot

Lastly, but not least-ly is Order of the Stick, a really funny D&D based comic that plays on the rules that players have to follow and how ridiculous they would seem if you were "in game". The artwork is strictly stick figures, but it's very funny in low-res sort of way.

Pathfinder: The Next Generation

So I joined a new group of gamers a few months ago for some good ol' fashioned D&D 3.5, cuz none of are even remotely interested in 4th Ed (more on that another time). We were having a lot of fun with it, but we've all known for a long time that it's a dying system now that 4th Ed is out so we were looking for something new, but similar at the same time when one of the guys suggested Pathfinder RPG. I had seen their products before but assumed that it was just expansion modules and supplements for 3.5. Turns out they picked up the 3.5 ball that Wizards of the Coast dropped and decided to run with it. Well, we all bought the core rule book and turns out that it is an outstanding product. From the cleaned up rulebook, to the expanded (but not overdone) feats and combat system, all the way down to the art work is top notch.

Welcome to the Frothy Friar

Hi and welcome to the Frothy Friar!

This is the sister blog to Adventure Writing and You that will chronicle my foray into writing an RPG module and an attempt to get it published in some way. While that blog will stick to that aspect of my gaming life, this will encompass everything else gaming related including product reviews or older games and systems, discussions of all things gaming, random thoughts and anything else that lands face first on the page.