RPGs I wish I had played...

Yesterday I listed some of the RPGs that I've had the pleasure of playing over my 30 year gaming career. Today I would like to talk about a few that I always wanted to play but never had the opportunity. The reasons were always sound (i.e. the group I was with just wasn't into at the time, no one was really sure how to run an effective game or they just didn't want to learn ANOTHER game system) but the fact remains, I wish I had the chance to play them.

I like the concept of Call of Cthulhu (CoC). I like the idea of an overwhelming evil lying just beneath the surface of reality and sometime the evil showing it's insanity-inducing face. The mythology is, of course, well documented and legendary thanks to Mr. Lovecraft, and the creatures are terrifying to say the least. I only really liked the original version of the game, the 1920's era. When I first bough the boxed set, Indiana Jones was on the scene and I couldn't help but imagine Indy facing off against monstrous beings from another world...all while dodging giant bowling balls and punching nazis. In fact, not to get too far off topic, but wouldn't Indiana Jones and the Kingdom of the Crystal Skulls been a lot better if it had been Indiana Jones and the Mountain of Madness?

Anyways, I digress. The pulp era seems perfect for this sort of game. It seems to stress investigation over hack and slash. It takes place in a time when science was really taking front and center in the world over superstition and mythology and the creatures the party were facing were so dangerous that a mere pistol was laughably ineffective against them. Unfortunately, this fact about the game is probably what kept me from finding a group that wanted to play it. The group I was with, and still am, was very heavily into D&D and liked to solve 99% of it's problems with the appropriate amount of sharp steel. This attitude doesn't lend itself well to an investigation-based game system. 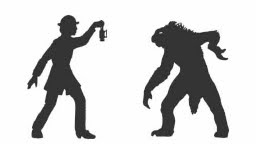 I still thumb through the rules on occasion to get the feel of it, and I like to watch old black and white movies as long as they have something mysterious and monstrous going on, but I don't think I'll ever get a chance to travel the globe tracking down clues to a mysterious star shaped symbol carved in a stone sarcophagus that just recently arrived at Miskatonic University. 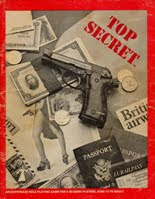 I've always liked a good spy movie; The intrigue, the adventure, the unraveling of political backstabbing. I just never could come up with a good adventure for a party of spies. It just didn't seem right. What government in their right mind would send 007, 004, 005, 0013 AND 009 1/2 on the same mission at the same time. How would they decide who gets to play baccarat against the evil Dr. Sinister? Would the shark tank be big enough to fit 5 super spies in it? Who gets to drive the Aston Martin? Would they take turns working the machine guns and oil slick? And we won't even get into 5 spies all seducing the same villainess! 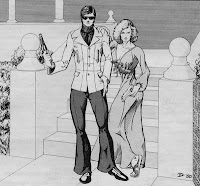 This seemed like a game for a GM and 1 or 2 players max, and with a decent size game group, that would leave a lot of player out in the cold. Maybe someday I'll get to run one as a quick, one-night adventure. 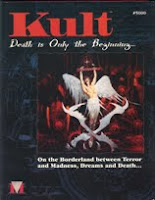 This is a more obscure game that I stumbled on in a local game store years ago. It's sort of a MUCH darker version of Call of Cthulhu in that it is a real world environment with a much MUCH darker underbelly. The back of the rulebook sums it up fairly well...

"Kult is a contemporary horror role playing game. It is set in the here and now, in the reality of today. But reality is not what we think. Around us the world is dark and dangerous and nothing is what it seems to be.

Our reality is an illusion to keep us captive. We are imprisoned since ages past by a dictatorial creator. The true world, invisible to us, is ruled by creatures that dominate behind the false facades, our prison wardens and torturers.

The characters in Kult are dark heroes, governed by destiny. When the illusion shatters, they face the true reality." 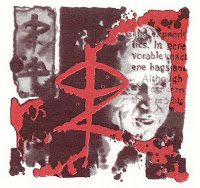 It's sorta like the Matrix meets Hell Raiser. People live normal, every day lives, but behind the scenes there are demons lurking in dark alley ways; vile beasts pose as politicians and corporate CEOs to sew seeds of anarchy; serial killers stalk the streets of small town America. Similar to CoC, the more insane a person is, the more attuned to the reality behind the illusion he is. He may seem like a nut job on the subway to work, but maybe he just sees things that you and I can't.

Again, similar to CoC, the game was more about investigation that gown-and-dirty fighting. There was certainly combat to be had, but it definitely wasn't a dungeon crawl. I think this kept some players away. It was more fun to kill Monster "A", receive Treasure "B". That, and it is a very dark looking game. If this were released in 1980, EVERYONE would have thought role playing games were the devil's handiwork. I think that was somewhat of a turn off to some of my players. 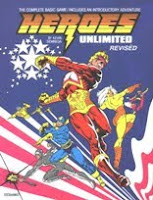 Super hero games have always held special place in my gamer heart for some reason. I grew up collecting comics with my brother and I used to love reading them and pretending I was a super hero. Then again, who among us has never tied a towel around our neck and pretended to fly? God I hope I'm not the only one...

We played Marvel Super Heroes for a very long time. Sometimes we would spend the whole day playing it, each player taking his turn running a short adventure for the other players. But not long after we started playing, the product line was dropped and there wasn't anything new coming out for it. So I thought this would be a good game to try. Unfortunately, my game group had tried the Palladium system once...once. I know some people out there swear by it, but we just couldn't get in to it. It was a long long time ago, but I seem to remember one of the basics of combat is you need a roll of 4 to hit, modified by any to hit bonuses etc. This was kind of strange to us coming from a hard core D&D background so we never really went back to it. And with that sour taste in our mouths, Heroes Unlimited was forever shelved.

Next time on the Frothy Friar...Board Games!