For years now I've been creating and honing a role playing game the way I've always wanted one to be. It was always sort of a pipe dream that one day I would sell it to someone and become rich and famous and millions of people would flock to my house for words of wisdom in gaming...and errata clarification. Well, I don't see the later part of that ever happening, but I do still have hopes of producing an actual product that someone, other than me, can hold in their hands and use.

It started out a very long time ago as a Post-Apocalyptic alternative to Aftermath! because, while my friends and I loved PA games, none of us had an engineering degree to understand their rules. From there it started to expand and grow and mutate. Never one to leave an RPG alone, I have always had a fascination with rules tinkering. I would change rules to popular games and alters procedures to better fit the play style that my friends and I liked. I never quite agreed with D&D's level and class system, so I changed it; I couldn't understand all of Aftermaths rules, so I smoothed them out; I wanted my players to be Star Wars races in Star Frontiers, so I created them. Before long, my little post-apocalypse game began to turn into a universal system. I started wanting to run genre mixing games where modern day soldiers are plunged into a fantasy realm or fantasy characters stumble upon a downed space ship (Got that one from Expedition to the Barrier Peaks). Unfortunately, none of the systems out there really did what I wanted them to do. Sure there was GURPS and a few others, but I was far enough along on creating a new game that I didn't want to settle for someone 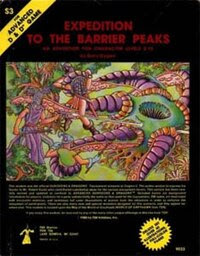 So I worked on it...and worked on it...and...well...you get the picture. My group play tested it, partially because they're good friends and partially because I forced them to. Eventually, we started putting all of the other games aside and all started writing adventures for the Empire system. They were good about helping out where they could and giving me brutally honest criticism. I didn't always want to hear it, but in the end it was good for me.

Edition after edition went by, minor changes became major overhauls until I got to the point where the changes stopped and the playing became smooth and fluid. That's when I knew I had something. Unfortunately, I never really knew what to do with it. Like I said at the beginning, I had a pipe dream, but that's all it was. I didn't know how to write a book! I still don't, really. I don't know how to do page layout or formatting, how to contract for art work or find a printer...but I'm learning.

Just recently (the last couple of years) I've seen so much activity by bloggers that have done just what I'm attempting to do...publish an actual product! I saw James Raggi over at LotFP, The guys at The Savage AfterWorld, Dyson (one of my favorite mappers) at Dyson's Dodecahydron to name a few, and I thought to myself that maybe I can do it too. So I got to work and started writing. I've been writing pretty seriously for the last 8 months converting my summarized rules into something resembling a rule book. I know I have a ways to go, but I can actually see something on the horizon.

So that brings us to my blog. A couple of years ago I started a different blog and I was going to chronicle my quest to write an adventure from start to finish with maps etc. Well, that was fun for a little while, but I noticed something while doing it, when it came to the actual rules the module would be written for, I couldn't decide which set to use; would I use Pathfinder? an OSR set? (God help me) D&D 4th edition? and what I kept coming back to is I should write it for just a generic setting. and before long I said to myself that if I was going to spend all this time writing, I should spend it on something I love, so that's what I'm doing.

So I thought I would introduce the game on here and float some of my ideas past the interwebs at large and see what sort of feedback I get.
Posted by The Frothy Friar at 6:06:00 AM