I'm Down with OD&D, Yeah You Know Me!

Another game we played during my long blogging hiatus was some old Moldvay basic set D&D.
I ran the game, and it was an adventure I've been working on (unsuccessfully I might add) over the last several months, as is evidenced in my other blog that I barely do anything on Adventure Writing And You. So I decided to forget all the crunch-i-fied newer rules and just run it as a nice, simple Basic Set D&D game. The problem is, it's been 30 years since I even touched that system and a few of the players I had are relatively new to the game so they were stymied by the lack of guidelines in the rule book.

Like I stated in my thoughts of Vampire: the Masquerade, it was a very free form system back before there were 350 pages of rules and guidelines to tell a player exactly what he can and can't do. It was a time when it was up to your imagination to solve problems and keep the adventure going rather than flipping through page after page to determine exactly what skill/ feat/ class ability you have that could be useful. 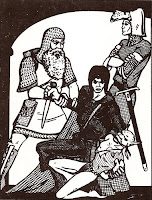 While I like the freedom, and I miss those days when you played just to experience the adventure almost in a narrative game style with the DM telling half the story and the players telling the other half, I confused myself as the DM because I didn't fully explain how the old system worked. And that was MY downfall. Most of my players didn't grow up with OD&D and the Basic Set like I did so they didn't understand how is was supposed to work in spirit rather than in technical terms.
It was almost like telling a young adult that Star Wars (the first one, the prequels don't exist) is one of the greatest movies every made, but when they watch it they think "Eh, it was ok. The effects were so-so and I've seen the story line a thousand times before" but they don't realize what sort of an impact it had 'at the time'. And that's what I think OD&D and the Basic Set are. They are the precursors for things to come. They are the building blocks on which all RPGs are build upon and I think that got lost. 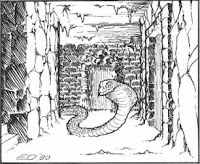 I was looking to experience what I did back in '79 with a new group of friends and unfortunately I think that message got lost on them. The game was relatively fun, but I saw a lot of blank stares and fumbling with sheets of paper every time I gave them a situation to react to because no one knew what they were ALLOWED to do. They would tell me what they were going to do, but almost in the form of a question like they were testing the waters to see what they could get away with doing. By the end of the night, which unfortunately ended with the entire party being captured by a bandit clan, they had started to react a little more confidently, realizing that as long as it was in the context of their character class, (fighter, thief, cleric, magic-user, elf or dwarf) then it was ok to try. And that seemed to liberate them a little.
I think my ultimate conclusions for this little experiment were:
1) It's not 1979 anymore, I can't go home again
2) While it's freeing to play just to play and enjoy the scenario, I like a little more crunch in my system
3) I really need to get back to working on my adventure
4) I really need to DM more often. I feel like I'm losing my chops
Posted by The Frothy Friar at 7:22:00 AM

Email ThisBlogThis!Share to TwitterShare to FacebookShare to Pinterest
Labels: Adventure Writing and You, Basic Set, Dungeons and Dragons