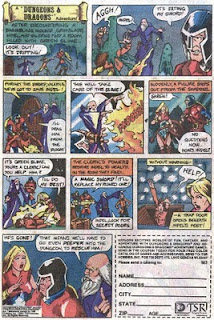 In episode 2 the Green Slime drips from the ceiling and falls on Indel and melts Valerius' sword down to the hilt. Grimslade unleashes a burst of fire to force the slime back. Out of no where comes a cleric named Saren. How did she find them and did they know she was around? Seems suspicious to me.

Saren heals Indel and from a chest Valerius discovers a magic sword. Indel looks for secret doors but instead finds a trap door by falling through it. Does he seem more like a liability to anyone else?

The rest of the party knows they have to go deeper into the dungeon to rescue him.