Ever been on one of those adventures that just don't seem as profitable as you think they should have been, but the party thief comes out more bloated than when he went in?

Does the title "Thief" imply and influence a player too much? Just because he's called 'thief' doesn't necessarily mean that he has to steal everything that isn't nailed down, even from the party itself. Granted, the player is entitled to play his thief in any way he wishes and it is up to the party to deal justice if he is caught pilfering baubles from their pockets, but does it undermine the cohesion of the party of they are constantly suspicious of one of their own members?

A thief, or Rogue as they are now called, has a particular set of skills that are geared towards illicit activity. They didn't 'accidentally' give him Pick Pockets and Hide in Shadows. It's part of his very character to break the law and do things that would make any Paladin clutch his pearls. So should we be astonished when he turns his craft on those closest to him?

There are two schools of thought on thieves. The first is that the thief is merely a person with a unique set of skills that can be utilized for those abilities in a dungeon. There are always deadly traps to be found and unsuspecting monsters that need to be backstabbed, and that's exactly why you need to bring him with you. But the same party that brought him along expects that he should be fair and equitable when finding loot, just as they would be if they were the first to open the locked and possibly trapped chest. Nothing wrong with that, equal pay for equal danger. It's not like the fighter lays claim to any pocket change that the orcs he killed had on them. So the first kind would be considered an expert treasure finder. Someone who steps in when the monsters are killed and the party is being healed to seek out those pesky poison dart traps and get the loot from the bottom of the crackerjack box. 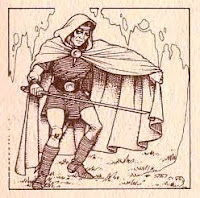 The second is not so popular. The second is the self-serving, sticky fingered loot magnet that always seems to find what other 'misplace'. This type of thief cares nothing for share and share alike, he is in it to get as much treasure as he can get his black gloved hands on, even if it means dipping into his party's own coffers. These thieves are usually frowned upon and eyed with a great deal of warranted suspicion. You can usually spot this type by the stack of ripped pieces of paper passing from him to the DM every time the party is otherwise occupied.

I, personally, am all for fairness in a party. All of the adventurers are taking a risk venturing into the depths of the earth in search of riches and fame, but I also find it hard to condemn the party thief for using the skills he is given. After all, isn't that why we brought him along? Maybe his lack of target discretion leaves a little something to be desired, but that's the chance you take when you hire a character class named after a criminal activity.

Email ThisBlogThis!Share to TwitterShare to FacebookShare to Pinterest
Labels: Dungeons and Dragons, Thief