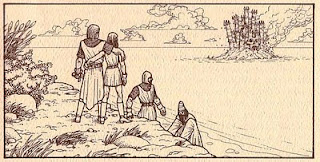 I have yet to play 4th Ed. I've glanced at the rules in passing but haven't given them a good look and I don't think I ever will. It's not that I'm an "old schooler" and rebelling against those darn kids and their new-fangled gamin'. It's that the entire rule system seems to pigeon-hole everyone into even more specific roles than even the original class system did.

I've always been a fan of free play and being able to play your character the way you want to play rather than the way your class says you're supposed to. I've never really connected well with even the original D&D class system, although it is the system I've been playing for over 30 years now. I don't want to be told "you're a magic user you can't use a sword." or "fighters can't pick a lock, that's what the thief is for". I want to play the character that I've imagined in the way that I imagine him. And that's what I feel 4th Ed does even more than 1st, 2nd or 3rd edition. Not only do you have a class, but now you have a specified roll to play as your class.

Just because I'm a wizard, why do I have to be the "controller" and buff/ debuff people? What if I wanted to be a scholar in search of vast knowledge and gear my character to divination? what if I want to be a war mage and stock up on powerful damage spells? It seems to me that the game is forcing people into tighter and tighter constriction and taking away the gift of freedom. Now people are forced to play a role rather than just play. I don't want to be in combat and told by the rest of the players to stand back and buff the fighters because that's my job. It may be the best course of action in that situation, but what if its not? Is flexibility and creativity the victim of simplified rules that you can fit on a convenient card? 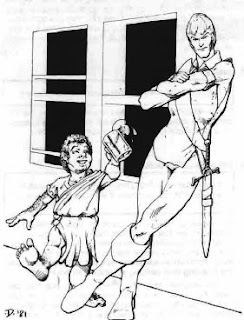 Gone are the days when you could blur the line between character classes and create something unique to your style and perhaps something that no one else had thought of. Now are the days of appealing to the console generation. Aiming your marketing strategy to those that grew up on video games with their instant gratification and spoon fed visual feedback rather than those that grew up on books and using your imagination to visualize what the author intended. It feels as though 4th Edition is encouraging new gamers to get away with not thinking but merely reacting. "If the DM says this, then my card says I do that."

That wasn't how I grew up. I never played played cowboys and indians and thought "gee, I would like to sneak up on Billy, but I'm a cowboy and can only use a ranged attack weapon. I'll have to get the scout to do it." Role playing games should allow players to explore their surrounding, experience what a game world has to offer and affect how it lives and evolves. It shouldn't be a card game where the DM plays his card and you counter his with yours.

I love the game, if I didn't I wouldn't still be playing after all this time, but it's not the same as it used to be and I miss that. If I wanted to play a game where I had a limited ability to improvise and couldn't stray from the intended path or my character's pre-determined role, I would sign up for World of Warcraft again. What made me stop playing that in the first place was the fact that I could only do what the game designer told me I could. That's not role PLAYING, that's playing my ROLE.