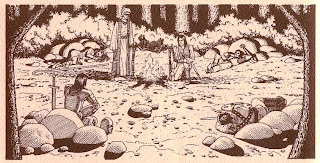 So what does a party do during the down time in adventures?

Do they sit around on the ground armed for random encounters while the wizard sleeps to regain spells?

Do they just make a camp fire and set up watch for the night?

or do they even have down time? Traveling day after day to the ominous sound of the gods rolling random encounter dice?

Is Dungeons & Dragons, or any other RPG for that matter, just a series of combat scenarios and selecting which corridor to go down or is it a complete role playing experience? I, for one, have always wondered what the party does, or even CAN do when its time to settle in for the night. There has always been a decided lack of activities that a party can engage in before they set watch for the night. Sure a player can say he's getting firewood for a fire, but to what end? Wouldn't it be nice if a character, say a Ranger for example, could go out hunting for food and have it mean something? Any task that the party does do seems to have no consequence and thus there is no reason to actually role play any of it. There could be dozens of skills that a party could employ in this down time. 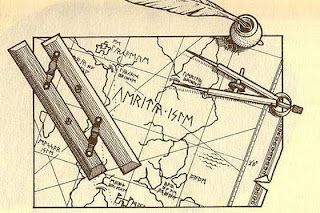 Realistically speaking, a party doesn't just pull into a nice rest stop with a bbq pit and restrooms whenever they feel like getting some shut eye. They have to play ahead and get ready to camp well before dark. They need to find a suitable location, collect firewood, cook food, possibly FIND the food first, maybe some sparring or other practice, scribe scrolls, pray, the list is endless. So why not implement some of these activities and allow the players to role play things other than combat and interacting with the king?

Years ago (many, many years ago), I began writing a game system of my own out of frustration with other systems that were on the market. I was aiming for something a little more realistic that could take advantage of all aspects of role playing and make even small things like camp side activities worth the time and an interesting addition to the game other than the old standards.

Granted, not everything needs to be role-played out, but imagine things like the scene in the extended version of Lord of the Rings when Strider comes back with a deer slung over his shoulder. That's good flavor. And there are dozens of things that players can do to add flavor to the role playing experience and get things accomplished rather than it just being a few lines of dialogue just to say you did it. 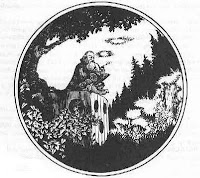 I'm in a game now, playing a wizard with some magic item creation feats and the party is always after me to create some items for them. Well, it takes 1 full day (8 hours I believe) per 1000gp value to complete. Well, how much time do I have while the Ranger is hunting and the Cleric is praying and others are setting up camp? Could I maybe spend a couple of days on the road working on those items in my downtime? that sure would eliminate the need for the entire party to sit around town for 3 weeks while I work on everything that the party is wanting.

Here's just a few things that a party could do for 2 or 3 hours a day in between stopping for the night and sleeping:

These are just a few of the things that could add to the immersion of an adventure. Otherwise, why not just start every adventure at the entrance to the dungeon?