I had the day off Monday and my wife was slaving away at work, so I figured what better time to ignore my honey-do list and go see a movie!
I've been a huge fan of Tron [1982] since...well....1982. I went to see it with my dad and brother when I was 12 and then played the video game till my eyes bled. I had a vcr copy of the movie that I got off of tv that lasted me until I could buy a VHS copy for myself. And then I bought the DVD as soon as it came out, only to have to buy it AGAIN when the 20th anniversary edition came out (which was worth it btw). So saying that I was looking forward to the sequel is a bit of an understatement. I saw the test footage they shot for comic-con back in 2008 and I've been waiting with baited breath (or was that jalapenos?) ever since.
I was starting to worry that maybe I was over hyping myself and setting the movie up to be a disappointment in my own head, so the last couple of months I started avoiding anything Tron related, just in case. Then I hear that its been filmed in 3D which was a huge strike against it for me. Ya see, I wear glasses, and 3D glasses over regular glasses just doesn't work.

Fortunately, I found out it was showing in 2D as well, so that's where I headed.
I don't want to give away any spoilers, because I have to recommend this movie pretty highly. The story was ok at best, but got the job done. But with a movie like this, the story sorta take a back seat to the amazing visuals you're experiencing. And they were amazing. I really felt immersed in another world. Everything felt sorta block and yet clean and streamlined at the same time. There was plenty of action to keep you entertained and enough story so it didn't feel like you were just watching someone play a video game.
The character's were engaging enough and it was good to see some of them again after all this time. The nostalgia factor was pretty high for this one, but at the same time it felt updated and current. The soundtrack was really well placed as well. I've never heard of Daft Punk before it was announced that they were doing the music for this movie, but I honestly couldn't have picked another group to do the music. 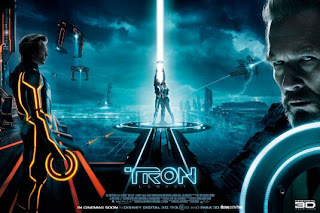 Now for the quirks with the movie. CGI Jeff Bridges was certainly intriguing but his mouth didn't move normally and was sorta distracting. It was weird, it looked just like Jeff Bridges. You almost forgot that he wasn't that young in real life, but when the character talked, it just didn't look right. Granted, the technology is relatively new so you have to give them a little slack. Pretty soon, you won't even need good looking actors, you can touch up the average ones and make them good looking.
Second, and this is totally trivial and I don't even know why it bothered me, but here goes...There is a scene (its shown in the trailers as well, so I don't feel like its a spoiler) where a "light cycle" car is doing doughnuts on the game grid in the computer world and for some reason there is smoke coming off the tires. I can understand that all the "people" in the computer world are supposed to represent programs, and the roads and stuff are the information superhighway etc etc, but what is smoke? Why would there be smoke in a digital world? Like I said, very trivial but it sorta bugged me for some stupid reason.

All in all, I have to recommend the movie, if for nothing else just for the visuals you get to see on the big screen.
Oh, I almost forgot...
I honestly could not tell that it had been filmed in 3D. It looked like any other 2D movie I have ever seen. Which is a good thing. I didn't feel like I was getting jipped by not seeing it in 3D. And of course now I want to go see it in 3D to see what THAT would look like.
Posted by The Frothy Friar at 12:07:00 PM