My Powers are Fading

A long time again, on a PC far far away I used to play Ultima Online, one of the first and, in my humble opinion, one of the best MMORPGs ever made.
It ran on a system of skill points. Each character could gain up to 700 points divided among all the available skills to a maximum of 100 in each. As you performed certain tasks, that skill had a chance of being increased do to usage. The funny thing was, if you had already gained all 700 skill points and gained another point in a skill, it would take a point away from your least used skill. This was to simulate an atrophy of skills that are hardly used in favor of those that are used often.
And that's where I stand now. I've spent many many years writing a game system, and preparing utilities and "what if" supplements, that my GM skill, Map Making skill and Adventure Generation skills have atrophied. I can feel them ebbing away as I write. Every time I sit down to work on one of my many adventure idea seeds that are rattling around the big, empty soda can that is my head, I freeze up. I stare at the graph paper and nothing comes to me except "I need to make this map in small 4"x4" squares so I can place them to generate random maps". When I try to write out a storyline, I start thinking in terms of "Does my rule set allow for these types of actions and scenarios?" Even if I read a pre-made module, I start analyzing it and breaking it down to point our what I don't like with THEIR system and how I can correct it in mine.And then I can't even prepare for a simple D&D or Pathfinder game because it inspires me to run back to mine and continue writing to fix their mistakes.
I haven't actually GMed much in the last couple of years. I ran a Moldvay Edition D&D game that collapsed under its own lameness (my fault) and a couple of sessions of a zombiegeddon game using my rules to teach some people that were interested in what I was doing. But even that was more instructional that playing so the game play was only for a couple hours out of a full Saturday.
I ever started getting a bit of anxiety about how much actual game I had written for the group. "What if they don't have fun?" "What if what I have written only lasts an hour or two?" "What am I going to do if they stray from what I've written?"
I used to be a pretty good GM. I could start with a map and improvise an entire weekend dungeon crawl based on a seed and what the party did in the game and no one would ever know that I had made it all up. There is no way in hell I could do that now! And I wish I could, but I always feel like I need to get back to writing my rules so someday I can figure out something to do with it.
I feel a little awkward "demanding" that I be allowed to DM my group just so I can sharpen my skills again. I could probably just mention that when we're done with our current adventure that I would like a go at it, but in my current state of mind I'm not sure I could prepare something if I had a month to get it done.
Hi, my name is Brian....and I have GM brain freeze. 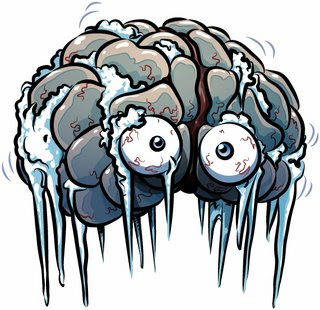