Look Out! It's a Chase Scene!!

Pictured: NOT the party!
I've been trying for years to set up a chase scene for a party of players. I want them to be chased by an opposing force, either a large creature or band of enemies. I've tried it several different ways: Once the party was in a wagon being chased by a larger force on horse back. Once it was a chase out of a bar and into the twisting streets of a port city. Once it was a dragon chasing them through a heavily forested area...etc etc etc. I always write a nice "script" with obstacles and split second decisions that they will need to make to continue their flight to freedom.
I always ensure that the force chasing them is sufficiently more powerful than the party so as to "motivate" them to flee. I am always VERY descriptive of how powerful the opponent looks. And I can say with 100% accuracy that each and every time the party has stopped immediately and turned to fight ANYTHING that was going to chase them. No matter what I throw at them, they never run! I admire their bravery, but what in the hell do I have to do to make a party run??

I had a party of four characters in a wagon when they spotted TWELVE fighters and an enemy mage that they had a long history with appear on a rise not far off. They had more than ample opportunity to run and make a good escape, but, to the last man, they all jumped out of the wagon and waited for 13 enemies to arrive. I think you can all Spell What the Rock Was Cooking that day - T.P.K.
Is it peer pressure from the rest of a party that will keep a player from yelling "Lets get the hell outta here!"? Are they all afraid to look weak in front of the rest of the group? 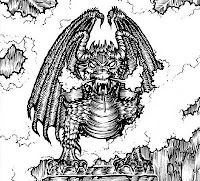 A party once stumbled upon a mysterious cave in the middle of a swamp. They were still on their horses and plenty far enough away when a 7-headed hydra strolls out of the cave and seemed upset that there were strangers on his lawn. At this point, the party was hardly an appetizer for the hydra and they knew it, but what did they do? You guessed it, charged headlong into battle. Unfortunately, three of the seven heads went to bed hungry that night, but the others were fat and happy.
Do some parties just see everything as big pinatas full of XPs that need to be smashed in order to get to the sweet goodness inside regardless of how big and angry that pinata may be? Are they all lab rats that need to keep pressing the food pellet lever even though they just get shocked every time?
Has anyone else successfully had a nice enjoyable chase scene with a party without specifically coming out and saying "RUN DAMN IT!!!"? Or am I just expecting too much from players to know their limitations and accept them?
Posted by The Frothy Friar at 5:30:00 AM