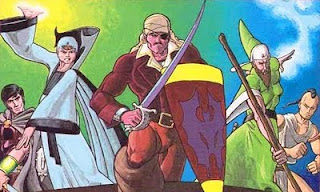 One thing I've always had a gripe about in D&D is the Class System. I can understand the theory behind them and the history of where they came from in war gaming, however as D&D continued to grow and evolve it seemed like character classes became just a "Flavor of the Month" addition to the rules.
What I mean is, is a Cavalier really anything other than a fighter with shiny armor and a horse? And if so, wouldn't it have been easier to expand the fighters basic capabilities and options to allow a player to create a cavalier on his own out of a basic class? 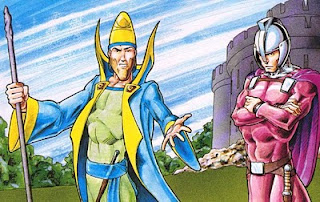 There are many, many examples of this. In fact, if you looked closely enough, you would probably find that most character classes could be broken down into a basic character class with some extended rules and options added on. How many new character classes have a truly unique game play style?
I can see a justification for a Wizard class and a Sorcerer class as they are played differently. One has a large repertoire of spells at his disposal but must choose just a few each day while the other has just a few to choose from but can cast a great deal more on the fly. Those two make sense.

Now lets look at the fighting classes. Are the barbarian and ranger really that much different than a fighter? Sure the barbarian gets Rage and the Ranger gets a favored enemy, but is that worth giving them their own classes? It would seem more efficient to call them both fighters and have the fighter class with options to customize into a wide variety of fighters. After all, the wizard class has specialist schools, why not fighter specialists?
Is the assassin really anything more than just a thief that uses poison?
Is the paladin much more than a priest that uses a fancy sword?

I feel that the more character classes that are released, the further away people tend to drift from the core classes and the more fluff and confusion is added to the game. I think everyone remembers 3rd and 3.5 edition with the complete mess of classes, prestige classes, feats etc etc etc. Most times a DM would have to do a ton of research just to find out what his players were actually playing. I eventually got so lost with all the supplements and add on rulebooks that I implemented a "Core Rulebook Only" policy, and then stopped playing D&D all together for quite some time while I wrote a game system of my own. 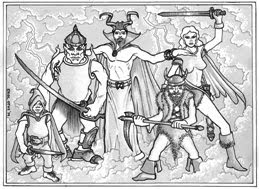 I can see the players need and desire to mix it up a little and play something fresh and new, but maybe the basic classes should have the option to create those fresh new ideas rather than have 1000 different classes and prestige classes that eventually overlap and start to look similar.

Was it all to justify selling new books? Probably
Did it contribute anything to the game? Not Really. The game was already well established and the rules fairly well known to anyone playing (even I got confused by grappling). All it seemed to do is add layer upon layer of fluff. It became about which book the player got his character class from so the DM would have to shell out another $20 just to see what the hell the player was doing.

This is how I break down some of the character classes available, with optional abilities of course :
Barbarian = Fighter w/ Rage
Ranger = Fighter w/ Favored Enemy
Duelist = Fighter w/ Light Armor and Specialty Attacks
Paladin = Cleric w/ Swords
Monk = Fighter w/ Open Hand and Dodge abilities
Bard = Rogue w/ Minor Spell casting tricks
Assassin = Rogue w/ Poison
Etc Etc Etc
The only truly unique character classes to me are: Fighter, Thief, Cleric, Druid, Sorcerer and Wizard. And even then I think Sorcerer could be an optional way of playing a Wizard and Druid could be an optional way of playing Cleric (except for the Shape Change ability).
Posted by The Frothy Friar at 7:08:00 AM