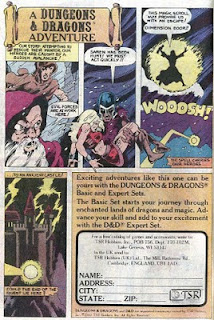 Episode 8 - The party reaches the Mountains of Ash and set off into them, straight into an avalanche. Saren is hurt by the avalanche and Grimslade uses a scroll to cast Dimention Door. The spell carries the entire party to an ancient castle. Could the end of the quest lie here?

Apparently so, since this is the last one ever published. Maybe the readers were supposed to pick up the quest here and role-play what they think happens from here.