According to my public school mathematics...this will be my 100th post!

Unfortunately, I'm not really sure what I should write on such an occasion, so I'm taking a note from Trey over at From the Sorcerer's Skull and posting one of my very first Dungeons & Dragon's characters. 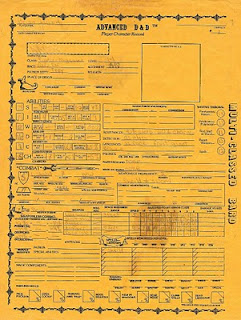 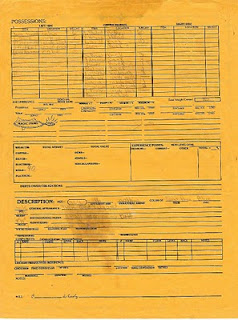 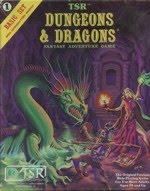 I started playing late in 1979, but never really knew how to play for quite some time, I just read the books and thought about being a wizard or dreamed of being a warrior on an epic quest. During the summer of 1980 my neighbor introduced my to a friend of hers that played D&D and said he would teach me how. She worked at the local Goodwill with her friend so my mom would take me down there once in a while so I could learn to play. We, my brother and I, would just make characters on lined notebook paper and didn't have dice so we would write numbers on strips of paper that we would put face down on the table. Most of the notebook papers didn't survive long, but my first ever character did, wedged in the pages of my Moldvay Basic Edition Rulebook. As soon as I got "official" character sheets, I transferred him over and promptly never played him again. But I still have him.
If you'll notice on the back side, you'll see that my character was carrying a lucern hammer on his belt.
Yes THIS lucern hammer.

Did anyone REALLY know what a lucern hammer was back then??
BTW, I couldn't think of a character name so I looked around my living room and on the bottom of a painting was a prayer in Latin that I couldn't read...except for one word.


You never forget your first character...

Email ThisBlogThis!Share to TwitterShare to FacebookShare to Pinterest
Labels: character, Dungeons and Dragons